FARGO, N.D. – Ja’vonte Johnson, the man who led the Fargo Invaders during their championship run last season in 2019, will be facing off against his old team at 7:00 p.m. Saturday, May 8, as Fargo invades the confines of the Minneapolis Warriors at Woodbury High School in Woodbury, Minnesota, in what promises to be a Northern Elite Football League (NEFL) clash of titans.

Johnson passed for 3,200 yards and 38 touchdowns and averaged 14.5 yards per completion while completing 47% of his passes for the Invaders during Fargo’s 2019 championship season, with 2,023 yards and 18 touchdowns across eight league games, including one playoff game and the championship. A pocket passer with negligible running stats, Johnson also threw 23 interceptions and took 22 sacks for a loss of 183 yards.

The Warriors are coming off their own title season as the 2019 Champions Amateur Football League champions. The Warriors last played in the NEFL in 2018, when they lost to the Sioux City Stampede in the league championship.

Last Saturday, the Warriors hosted the Bismarck Wolves in a game where Johnson completed eight of nine pass attempts for six touchdowns in an 11-touchdown, 83-0 taming of the capital city canines. For the casual fan looking at statistics, Johnson might look like a supervillain, but Fargo Invaders head coach Zach Stich, who coached Johnson in junior college, knows the Warrior field general inside-and-out. “He is quite a weapon,” Stich admitted, “and the Warriors are lucky to have a strong-armed quarterback like him, but we know that we have to play our game both offensively and defensively. Stats are a fantastic marker for any team and we will have quite of bit of things to look for when we take on the Warriors. The message we will be sending to our men this week is that we can’t come out flat and we have to play with high energy to get the win.”

The Invaders, too, are coming off a decisive 30-12 win over the MinnDak Titans from East Grand Forks, Minnesota, in a game that was played at 6:00 p.m. Saturday, May 1, in the Invaders’ home and league opener at Jim Gotta Stadium at Moorhead High School in Moorhead, Minnesota.

The Invaders showed the league they know how to play defense as the Titans only managed to complete 36.6% of their pass attempts. They forced the Forks area footballers to play unbalanced football, with 41 pass attempts and 10 rushing attempts. The Titans only made four first downs the entire game. Invaders coach Stich credits the camaraderie amongst his defensemen for their performance. “Our defense has been playing together for a very long time,” he said. “It is a tight-knit group and they understand what it takes to be a Fargo Invader.
“Bringing up the stats for the Titans doesn’t surprise me,” Stich continued. “As a head coach, I love knowing when they take the field that our offense will be back out there after four downs.”

Meanwhile, on offense, the Invaders managed to pass for 312 yards and four touchdowns while throwing five interceptions and losing 56 yards due to eight sacks, which proves… what?
“We still have a lot of work to do,” said Stich. “Some of those sacks were due to poor execution in the center-quarterback exchange, and these are all things that we will be working on in our next practice.
“On a positive note,” he said, “despite the five turnovers, we won by three scores. If we can clean up these things as the season moves on, I believe we will be a dangerous football team.”

The Invaders played a very balanced game against the Titans, with 27 rushing attempts to 33 pass attempts, and that balance shows up in time of possession, too, with the Invaders holding the ball for 36 minutes to the Titans’ 24. However, the team averaged less than three yards per carry. For the casual fan, the Invaders’ running game has been nothing to get excited about so far, but for coach Stich, it’s just what the doctor ordered. “You have to run the ball to setup the pass and vice versa,” he said. “When things are clicking in the pass game, it is because the defense is equally concerned about the run game.

“In 2019, we were very one-dimensional on offense and it allowed other teams to rally from behind if we weren’t successful,” Stich said. “If we can run a little, we can put the game to bed sooner. In regards to the yards per carry, our offensive line needs to be more aggressive at the point of attack and our running backs have to take what is given if we are going to improve.”

The victory over MinnDak was a good start. The Invaders’ first score of the season in league play came on defense at 8:46 remaining in the first quarter when linebacker Jamus Neal Jr. (#21) tackled Titans running back D’von Vanderbilt for a loss in the end zone to score a safety. A few minutes later, Neal Jr.’s brother, Invaders quarterback Jamus Neal III (#3), connected with wide receiver Constant Jackson (#12) on a 40-yard touchdown pass and with wide receiver Marcus Sigman (#80) on the two-point conversion to put the Invaders ahead 10-0.

For the next several minutes of game clock, the Invaders and Titans played footsie and punted the ball until, with 6:19 remaining in the half, Neal III fumbled the fourth-down long-snap, which resulted in a turnover on downs, and the Titans drove for the score to bring the game to a 10-6 Invaders lead.

The Fargo team would not let a fumble get them down, however, and on the next possession, Neal III launched a 33-yard pass to Jackson and a 32-yard pass to wide receiver Nate Soto (#19) to put the Invaders ahead by a 16-6 margin.

In the second half, turnovers, punts, and turnovers on downs filled the third quarter until, with five seconds remaining in the period, Invaders quarterback Dev Alger (#4) connected with wide receiver Jon Baune (#85) on a 12-yard touchdown pass. Alger connected with Soto for the conversion to put the Invaders up 24-6.

PHOTO: Fargo Invaders defensive tackle Cornelius Wahlo (#56) takes flight in the face of the MinnDak Titans passing game, which forced an interception Saturday, May 1, in the Invaders’ 30-12 win, in the team’s home and league opener at Jim Gotta Stadium at Moorhead High School in Moorhead, Minnesota. Photo courtesy Daniel Janes. 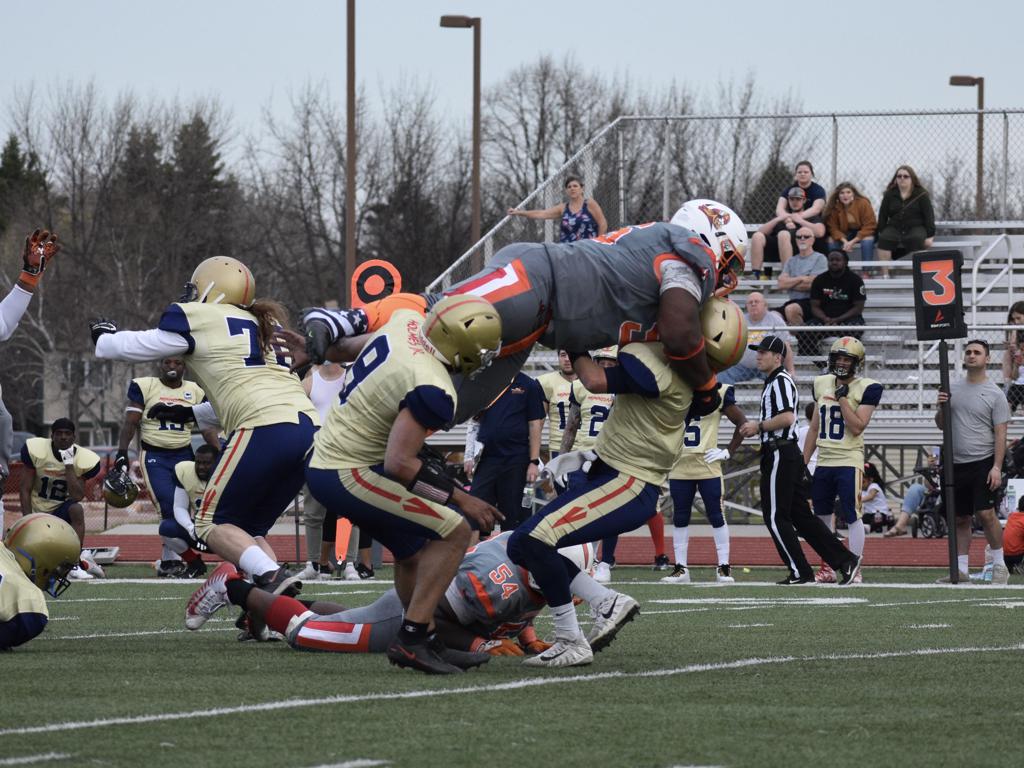