It's time for the inaugural Northern Elite Power Rankings.

Two weeks into the season doesn't paint a great picture, but there certainly are some teams that stand-out.

As the 7-time Defending Champions, it's going to take a loss for them to move out of the #1 spot. They pick up where they left off in Week 2.

Strong debut against the Brawlers, followed by a victory over the Warriors shows that the Invaders mean business.

An opening win against the Thunderhawks, followed by a victory at home over the Bulls put the Rough Riders in position to contend for the East Title in 2017.

Knocking off the defending East Champion Predators in Week 1, and the Force have re-loaded to contend for that illusive crown

The Warriors handled the Sting in Week 1, but came up 2 yards short in Fargo Week 2.  They will be a team to watch as the season progresses.

After a tough trip across Wisconsin, the Predators rebounded nicely in Week 2 dismantling the Thunderhawks in the 4th quarter.

It should be a strong season for the Bulls, but they were unable to pull out the Week 2 victory in River City.

After joining forces with the South Metro Patriots, the Battle Creek Sting look to compete in the West. They look to rebound from a Week 1 loss against the Warriors.

The first two weeks have come against the Top 2 Ranked teams, so look for the Brawlers to pick up some wins after their Bye Week.

The Thunderhawks held their own against two of the best in the East, but weren't able close-out.  2017 should be an improved season once the team gets rolling. 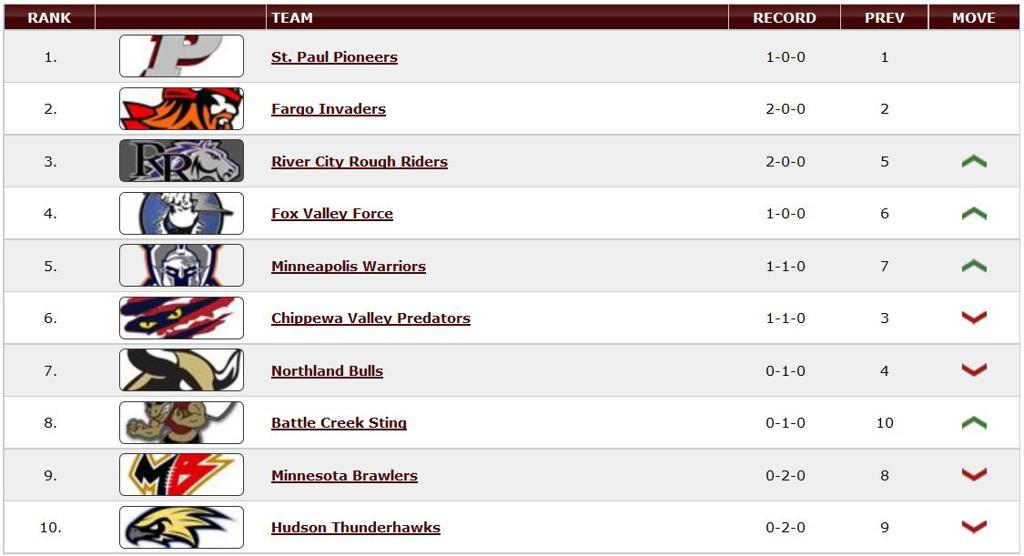