Good thing. Because Fargo, previously unbeaten in their first season in the Northern Elite Football League and winners of 14 straight games dating back to their previous league, refused to fold, staying within striking distance until the very end of the Pioneers 47-28 victory.

It sure began in a lopsided way, with Dominic Peace of the Pioneers returning a first quarter interception for a touchdown and a 7-0 lead. The lead would grow to 14-0, after a nice touchdown run by Daireus Mock. Quarterback Cleve McCoy would hit receiver Dejonte Skie with a touchdown pass in the second quarter for a 20-0 lead and linebacker Phil Breidall returned a fumble, forced by defensive tackle Jeff McGaster, for another touchdown and a 27-0 lead.

Immediately after Fargo drove the field to get on the board at 27-7, McCoy struck again, hitting receiver Stacy Kalkwarf with a 60-yard bomb before the half and a 34-7 lead.

The second half proved to be a more competitive game, and a bigger challenge for the Pioneers, as Fargo scored twice in the third quarter, once on a return of a McCoy fumble, while running back Isiah Sims scored to keep Fargo trailing 40-20 going into the fourth. St. Paul's running game though, led by Sims, who had 138 yards and leads the league in rushing, held the Invaders at bay. After a late Fargo touchdown and 2-point conversion closed the gap to 40-28, St. Paul's offense dominated 4th quarter time of possession for nearly 9 minutes before Mock scored one more time to end the contest.

Breidall led the Pioneers defense with 12 total tackles on the night. In addition to Sims, Mock had 74 yards rushing and two scores and is second in NEFL rushing.

St. Paul, now 4-1 overall and 3-0 in the NEFL, heads to Woodbury next week to take on the Battle Creek Sting. 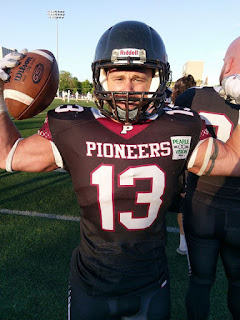 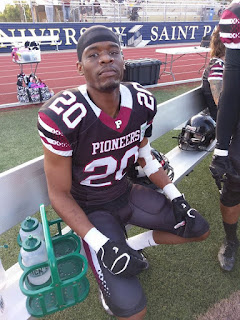 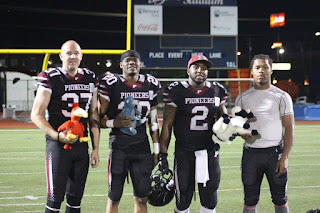