On to the Division Championship games.
If you cannot attend in-person (which you should), than at least check out our Facebook page as both games will be streamed Live!

The home teams won last week and in convincing fashion.  The Pioneers are looking like, well the Pioneers in the playoffs.  If there's any time to peak, it's for the playoffs.  And in the East, River City got back to form - attacking through the air and playing sound defense.
But now those two teams will have to travel, which in Semi-Pro tends to be a major disadvantage; in all the 2017 games, the Home Team has scored 1,062 (23.1 ppg) compared to 754 (16.4 ppg) for the Away Team.  So not only do road teams have to play as well as their opponent, but they have to play a touchdown better if they want to win.

The first game Minneapolis was coming off a loss to the Fargo Invaders, while the Pioneers were coming off a win over the Brawlers.  It was a rain soaked game, as the Warriors were looking to replace QB Tim Bona who went down the week prior and they were looking for an identity.  Though St Paul was coming off a win, they had already lost a preseason game to the Des Moines Blaze - so both teams were looking to avoid their 2nd loss of the season.  Offense was hard to come by for both teams, as there were 15 combined punts.  Minneapolis threw for 22 yards with 2 Interceptions and had just 16 rushing yards; St Paul got 102 through the air and 139 on the ground with an Interception of their own.  By the end St Paul was able to preserve the shutout, and send the Warriors (1-2) to #7 in the Power Rankings.

Just over a month later the teams met again; St Paul was undefeated in league play, while Minneapolis was on their own winning streak.  Without the rain the yards were easier to come by, but the points weren't.  The Warriors scored in the 1st for the early 7-0 lead, but no points would be scored again until late in the 4th quarter, as the Warriors went up 13-0.  St Paul added a score, but it was too little too late.

These two teams have been battling for the #1 seed all season long, and it wasn't until the Rough Riders dropped one to the Predators late in the season that allowed the Bulls to clinch.

Game 1 was a battle of QB's, as each threw for 250 yards.  It was a back & forth game, River City scored first but by halftime it was tied at 14. Northland took a field goal lead in the 3rd, until the Rough Riders were able to take the lead back and close out the game.

In River Falls, it was more about the defenses.  The Rough Riders were undefeated in league play, looking to clinch the #1 seed as the Bulls were looking to square things a 1-loss a piece.  River City scored a touchdown in the 1st but were unable to convert the extra point.  The Rough Riders held on to the 6-0 lead through 3 quarters, but when the game was on the line Northland did not disappoint the home crowd.  Capping off the win with a rushing touchdown + extra-point.

Prediction: Both teams are led by their QB play & a strong defense.  One team will go up 28-3 in the 3rd quarter, before losing in overtime. 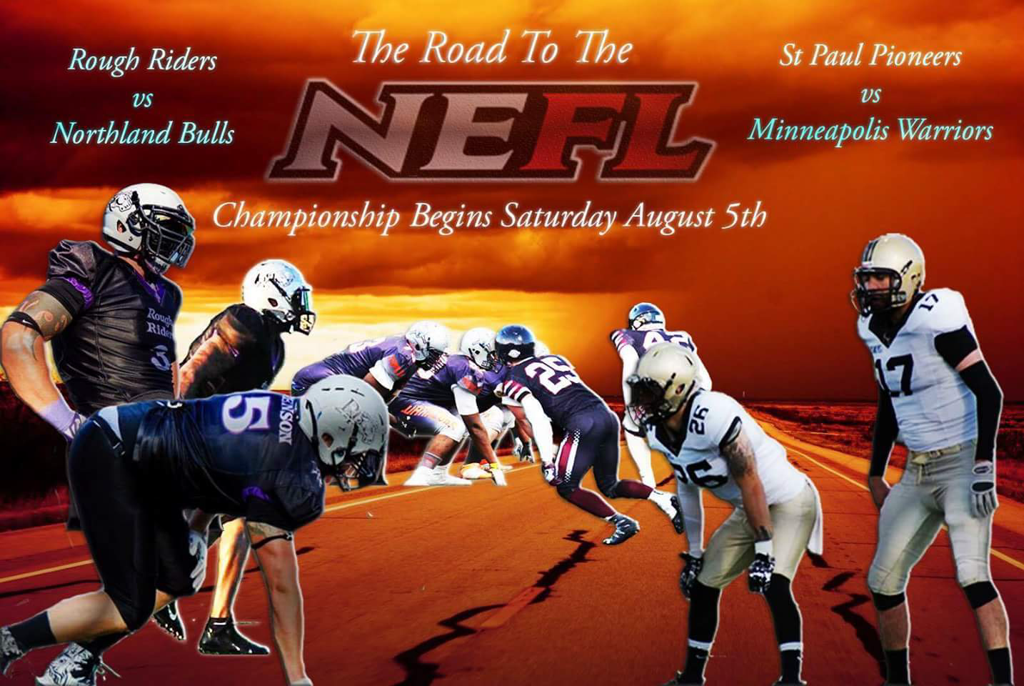