Minneapolis finished the 2017 regular season 8-2, on their way to a League Title & Runner-Up finish in the National Championship game.  They look to be even stronger in 2018 as they've added more depth.
Up Next: 5/5 vs #6 River City Rough Riders (2-0)

2017 was a disappointing year - in Pioneer standards - as the run of 7 straight Championships came to an end.  For 2018 they have a revamped Offense with excellent talent, and an improved stout Defense that's sure to light things up.
Up Next: 5/5 vs [MFA] Kansas City Bulldogs (1-0)

The Sioux City Stampede bring the most buzz to the league for 2018, as they completed an undefeated 2017 campaign in the well respected MFA.  2018 has been non-stop for the Stampede as they played indoor Sioux City Bandits tough and are adjusting with a new OC, new DC, new Field, and new League.  They'll definitely be a team to keep an eye on.
Up Next: 5/5 vs #10 Granite City Renegades

The Fargo Invaders started 2017 with a 6-1 league record with wins over the Warriors & Pioneers, but got blown-out the last two games of the season against the aforementioned teams as well as a non-league loss to the Stampede.  In 2018 the Invaders will look to build on the success, and finish strong.
Up Next: 5/12 @ #1 Minneapolis Warriors

Northland had their most successful season to date in 2017, reaching the Elite Bowl championship game.  In 2018 they return their coaching staff and NEFL Offensive MVP Brett Schreiner, as they look to take the final step & reach their full potential.
Up Next: 5/12 @ #7 Fox Valley Force

2017 ended with the Rough Riders losing to the Bulls in the NEFL Semi-Finals.  Though the Rough Riders have lost some key players from 2017, they've been able to fill those positions in 2018.  In two games so far in 2018, River City has looked impressive in wins over the Stanley Cowboys and Minnesota Vipers.
Up Next: 5/5 @ #1 Minneapolis Warriors

What started off as a great year in 2017, didn't end the same as the Force missed the playoffs.  Fox Valley has new life for 2018 with some changes in the off-season, and have already chalked up a win in 2018 over the Slayers of the NLFL.
Up Next: 5/5 vs [MSFL] Wisconsin Hitmen

Med City may be the biggest Wild Card in the NEFL.  Moving up from a successful year in 9-man football, the Freeze have only gotten better. They have a strong Defense and huge Offensive Line to pair with their backs & receivers. Look for the Freeze to make some noise in 2018.
Up Next: 5/12 @ #6 River City Rough Riders (2-0)

Hudson went winless in league play in 2017, but there is new energy for 2018. Only 6 players return, but with a New Head Coach and 15 players from the University of Wisconsin River Falls, the T-Hawks will turn some heads in 2018. Hudson has already picked up a win over the Minnesota Storm this season.
Up Next: 5/12 @ #11 Minnesota Vipers

Granite City is one of the longest tenured teams in Minnesota, but this will be their first year in the NEFL.  2016 had the Renegades in the Championship game of the NSFL, where they fell short to the Invaders.  For 2018, the Renegades will look to compete at the highest level, in the NEFL.
Up Next: 5/5 @ #3 Sioux City Stampede

Minnesota is doing what few teams have; compete in the NEFL as a first year team.  The last first year team to join the league was the Minnesota Valley Warriors, who took a year to land on their feet (now as the Minneapolis Warriors).  There will be challenges that come along with playing at the highest level, but the Vipers are taking that on looking to improve every week.
Up Next: 5/12 vs #9 Hudson Thunderhawks 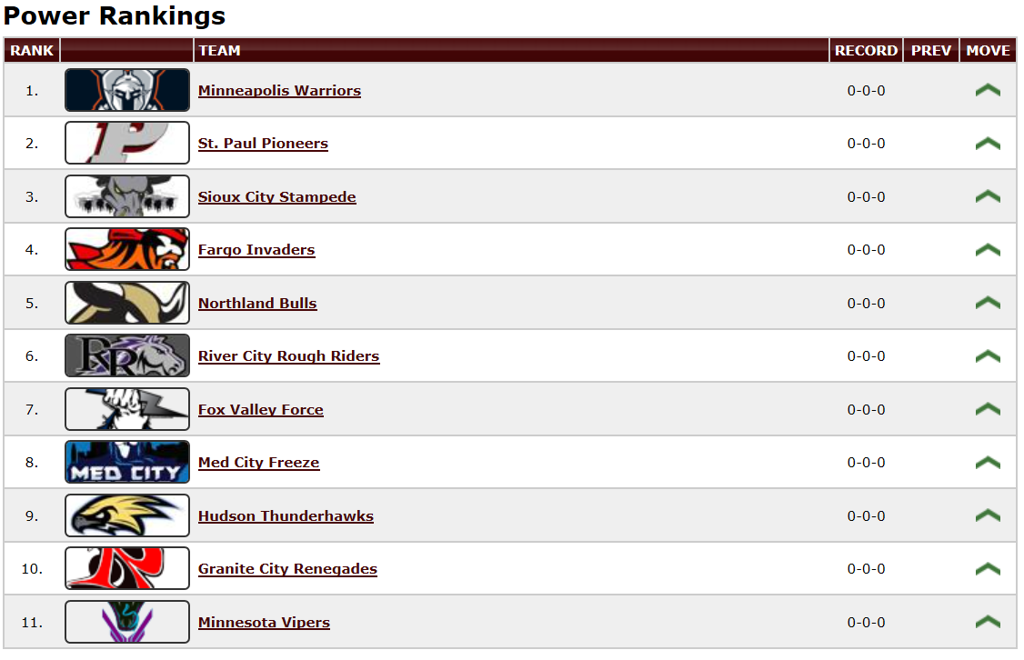